" ... some civilian bystander deaths would be permitted if deemed necessary and proportionate."

OUSTED LEADER OF SOUTH KOREA IS ARRESTED IN GRAFT CASE 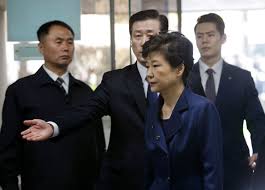 Back in 1979, I used to be a typesetter. (main clients: Rolling Stone Magazine and the Avon catalogue). So I tend to be pretty sharp-eyed when it comes to typos and bad line breaks.

For example, up until very recently, The Times was dividing the name Buzzfeed like this:

It's true there is a rule that states that you divide identical consonants between the two. But another rule says that that does not apply in cases where the division is more correctly a division between two syllables. So,

Buzz-feed. (They seem to have corrected the problem.)

Today, in the very first sentence, they divided something horribly wrong:

"The Trump administration served notice on Thursday that its next move to deregulate broadband internet service companies would be to jettison the Obama administration's net neutrality rules, which were intended to safeguard free expression online."

Well fuck you, you fucking asshole.

Might as well say it while I can still escape major jail time.

REPUBLICAN HARD-LINERS DISMISS, AND MOCK, AN ONLINE SALVO BY TRUMP

"Mr. Trump's targeting of the Freedom Caucus came on a day of an unexpected change in his senior staff. Katie Walsh, a deputy to Reince Priebus, the White House chief of staff, announced her sudden departure after less than three months on the job to work for a "super PAC" allied with Mr. Trump. The White House offered no explanation for the timing of her departure."

Betcha Priebus is next!

And finally, a short letter to the editor:

"Clean coal is a bit like humble Trump. Although both may be theoretically possible, few expect to see large-scale implementation of either in their lifetimes." 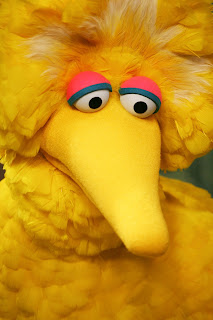 "The N.E.A. budget is $148 million a year, or less than 0.004 percent of the federal budget. The per-capita cost for Americans is roughly the cost of a postage stamp."

"... do we get more value as taxpayers from Big Bird and art or music programs, or from the roughly $30 million Trump's trips to Mar-a-Lago golf resort will cost us when he's tallied nine visits in office (he's already more than halfway there)?"

"... Big Bird will survive, but some local public television stations will close without federal support -- meaning that children in some parts of the country may not be able to see 'Sesame Street' on their local channel."

" ... the arts humanize us and promote empathy. We need that now more than ever."

Maybe the Big Yellow Fella can get a job as a coal miner. 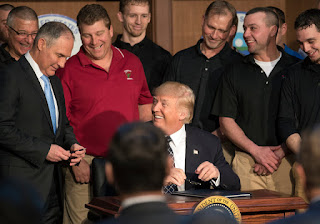 "A coalition of states, including New York and California, has already vowed to fight Mr. Trump ... they probably don't want to hear this again (said Attorney General Eric T. Schneiderman of New York), but if they want to repeal, they have to replace."

Referring to China, India and Brazil, Robert Stavins, a professor of environmental economics at Harvard says:

"The worst-case scenario is that the Paris agreement will unravel. That would be a great tragedy."

Understatement of the year?

I need to thank an old frenemy, Stu Mark, for encouraging me to blog. I think it was around 2006 or so, and I first heard the name Barack Obama at his house. So at some point, I did set up my blog, where I mostly write about music and film and family stuff.

Today, I begin a new blog. I am going to try and spew out a few thoughts about something I read in today's New York Times.

DROUGHT AND WAR DEEPEN RISK OF NOT JUST ONE FAMINE, BUT FOUR 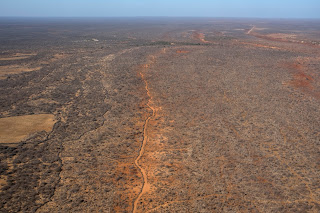 Somalia, South Sudan, Nigeria and Yemen. As you read this, several people in those countries just died from hunger and thirst. Are you hungry or thirsty? Could you satisfy your craving for food and/or water in the next few minutes, if you wanted to? I seriously doubt if anyone reading this right now can answer in the negative. So -- check out this paragraph from the article:


In some areas of central Somalia, a 20-liter gerry can of water, about five and a quarter gallons, used to cost 4 cents. In recent weeks, that price has shot up to 42 cents. That may not sound like a lot. But when you make less than a dollar a day and your flock of animals -- your family's pride and wealth -- has been reduced to a stack of bleached bones and your farm to dust, you may not have 42 cents.

Now let's move on with our lives and turn to Page A5:

Oh, it's a full-page ad. For Macy's. Buy any Clinique products worth $28 or more and receive a free 7-piece gift (a $70 value). Have you already forgotten about that little kid who is dying with a bucket of filthy water in a basin below the bed? Well, go ahead and buy the beauty products.

But think -- $98 (with only $28 coming out of your pocket) would buy 233 of those 42-cent water cans. Multiply that by the number of compassionate people who probably did not vote for our current president, and it seems to me that we've already saved a few kids from a horrible death.

Oh, and you look great the way you are!

I feel so fucking helpless.